Teapots and Tangos (Repost from 2006)

[Originally posted 31 January 2006]
aybe I’m in hibernation or something; I find myself sleeping all the time this winter. I can’t seem to stay awake. But I’m up now this afternoon or evening of the last day of January, and maybe writing something here will get me going a bit. I’m not actually counting on it, however.
A winter storm rages outside, but things are calm here, and with any luck, maybe they’ll continue to be. If the electricity holds. And the supplies don’t run out.
I’ve written “winter” now twice, but by my current eight-season model of the year, we are well into the season I call Sheol, or simply, The Pit. Winter, or Christmastide, is past, and we have nothing to look forward to till Spring. Hibernation may well be a good idea.
In the news we hear of the death of Coretta Scott King, the projected elevation of Judge Samuel Alito, and the coming (or is it now over?) State of the Union speech. And we hear that Muslims are once again in an uproar over some silly thing or other—in this case, the running of a handful of cartoons by a Danish newspaper depicting the prophet Mohammed (peace be upon him). This upsets them. I used to think that southern Baptists were the most idiotic people on earth for flying into a rage over nothing at all, but I’ve got to admit, these rioting Muslims take the cake. “…what they’ve done is beyond forgiveness,” says one Abdul Qader Ibrahim, described as a Sudanese housekeeper in Jeddah. “…we demand that the Danish government make a clear and public apology for the wrongful crime,” proclaims Nafez Azzam, a leader of Islamic Jihad. “It’s a matter that touches the heart of Islam,” says Hatim Misfer, a Saudi receptionist. A Saudi college student, Ahmad Alsaeed, said that a boycott of Danish goods was necessary because without it “the Western world would not have understood how serious this issue is to Muslims.”
Okay … I can’t speak for the entire Western World here, but speaking for myself, what I get out of this is that some Muslim people, at least, have been living in a cocoon for too damn long. Wake up! There's a huge world filled with people who don’t subscribe to your beliefs, who don’t care about your notions, and who aren’t even going to notice your boycott. What most people get out of this kind of behavior is that Muslims (in general!) are weird flaky people who are likely to fly off the handle for no good reason.
The issue here is control. Who gets to determine how a historical character is presented—his self-proclaimed followers, or all of us? The instrument is censorship—the attempt to prevent somebody with a message from reaching those who wish to hear (or in this case see) it.
And as for apologies—well, for one thing, the Muslim organizers of this boycott owe one hell of an apology to the people they’ve hurt with it—people who, by the way, had nothing to do with the cartoons or those who put them out. They owe an apology to all those they’ve offended in the West for their disrespect to the most basic law of civilized discourse—freedom of speech.
Whether anybody owes these Muslims an apology is harder to say. They certainly have every right to be offended, if that pleases them. They have every right not to subscribe to the Danish paper in question, if that pleases them. But they have no right whatsoever to keep me from looking at these images, if it pleases me and the cartoonists who made them. And the crime they are committing in trying to prevent that is indeed unforgivable. 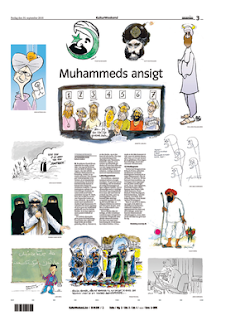