n this day, 31 December 12015 (H.E.), I have now been blogging for exactly ten years. It’s an arbitrary milestone, but I personally rather like them, so noting it would seem to be in order. On the other hand, I have absolutely nothing to say about it.
So, what the hell. Here there be hippogryphs and divers beasts. Remember the Maine. Look out for the horse cars. And so it goes.
Posted by sbh at 10:41 PM No comments:

Out But Not Down

tatus update: I’ve been having a hard time writing recently at least in part from the pressure of what’s going on around me. Yeah, okay, that’s an excuse, not a justification, but events have been exhausting. Most notably I’ve had a cold-like disease that while seemingly minor drained my energy considerably, stressful (separate) Thanksgivings with two (shall we say) branches of my family not on speaking terms with each other, and finally just two days ago a flood in the basement rooms I rent. It wasn’t much of a flood, as floods go—just an inch or so of water running through my bedroom and bathroom, but the chaos is considerable. In addition to removing the water and throwing out masses of stuff that had fallen into it and become useless, I’ve had people coming through to rip out the baseboards and install loud electric fans to dry the place out—these sent by my landlord.
As far as I can tell I haven’t lost anything of significance. Somehow in the chaos two fragile dime novels I own (related to the Modoc War) fell into the filthy flood water and turned up while I was cleaning up, but the plastic envelopes they were in appear to have done their jobs. (I won’t know for sure until they’ve dried off sufficiently for me to safely open them and remove the contents, but they appear to be safe inside.) A mass of receipts I was saving to show that I have in fact paid rent and performed other significant cultural rituals likewise ended up a sodden mass of indistinguishable garbage, but (keeping my fingers crossed) there’s a reasonable likelihood I’ll never need them. My towels are somewhat the worse for wear, but none of them are new, and they should continue to serve their original function.
Jesus F. Christ, though—waking up to the sound of water cascading through my window and across the small table I pretend is a desk (the antique desk I had for over forty years was deliberately destroyed a year and a half ago by minions sent by a lawyer with instructions to clear the house out) is something I don’t suppose I’ll ever forget. It was startling, to say the least. And it woke me out of a sound sleep. And I haven’t really slept much since then, what with one thing and another.
So, please note—I’m not complaining, not in the least—just explaining. I had entry-drafts for St. Nicholas’ Day (6 December) and Pretend to be a Time-Traveler Day (8 December), but I’ve missed them, so I guess they’ll have to wait until next year. Sorry about that. Still, I haven’t lost that old holiday spirit. I’m trying, mind you; it’s just hard to shake sometimes.
Posted by sbh at 9:41 PM No comments:

Meme of the Day 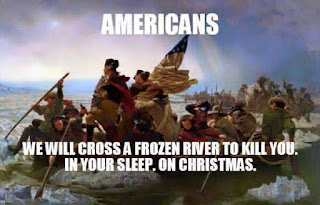