he poor little babies at the Melbourne Herald Sun are bitterly whining that people—stunned by the overt and blatant racism of Mark Knight’s recent cartoon—missed the point of the piece. It was a criticism, the paper lamely protests, of Serena Williams’ (alleged) bad behavior on the court during her match with Naomi Osaka—and apparently we are supposed to overlook the over-the-top racism of the generic stereotype used to represent Serena Williams and focus on what the “artist” intended, rather than on what he achieved.
Sorry, Herald Sun, but that’s not how it works. Your “artist”—and I use the term very loosely here—blew it. If he wanted people to focus on the message, he should have done it without the racism. Overt racism, mind you. J.K. Rowling’s ironic message has it just right: “Well done on reducing one of the greatest sportswomen alive to racist and sexist tropes and turning a second great sportswoman into a faceless prop.” (When I first saw the cartoon I was wondering who the girl in the background was supposed to be, and was stunned to learn that she represented the brilliant Naomi Osaka, reduced to a nonentity by the “artist’s” blatant racism.) Great cartoonists of the past—Thomas Nast and James Montgomery Flagg come to mind—used racist caricatures to make their points about the events of their days, but nobody holds them up for admiration on that point. No, the best people can do with that is to point out that they lived in societies that were more overtly racist than ours, and racism was a convenient and available shorthand for them to use in conveying their attitudes to their public. That excuse doesn’t cut it today.
The Herald Sun’s bitching and moaning about how people didn’t get it is missing the point completely. People got it. Okay, I can’t speak for people in general, but I got it. Insofar as the (alleged) artist was being critical of Serena Williams’ behavior on the court I halfway agree with him, though the chair umpire was not taking sides with Serena Williams, as depicted in the cartoon. Quite the contrary in fact. But the point here is that the Herald Sun chose to make its point by using a racist stereotype (rather than any sort of caricature) to stand for Serena Williams, and this in the twenty-first century, when we’ve supposedly grown past that. The Herald Sun (and its alleged “artist”) needs to grow the fuck up, learn from its mistakes, and apologize for its bad judgment—not blame people for reacting to its racism rather than focusing on the “point” the paper was trying (very badly) to make.
Posted by sbh at 10:09 PM No comments:

If You Don't See Racism, You're Part of the Problem

his 1904 sports-related cartoon by James Montgomery Flagg—the same guy responsible for the famous I Want You Uncle Sam recruitment poster—is racist as fuck. 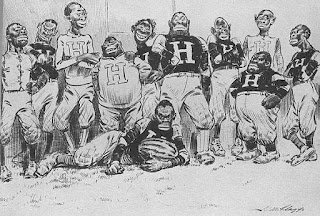 So is this 2018 sports-related cartoon by Mark Knight. 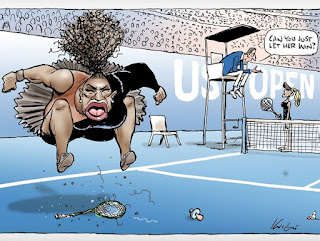 If you honestly don’t see racism in these cartoons then you have revealed to the entire world what is in your heart of hearts, and it ain’t pretty. You, my friend, are a racist. And you need to deal with it.
Posted by sbh at 6:43 PM No comments: