It is one thing for rich people to believe intellectually that everyone depends on them. In reality, it is they who are the moochers and looters, who depend on an entire system of low-wage workers for their luxurious lifestyles.

Mano Singham (“Threatening to Go Galt, Again”)
Posted by sbh at 9:09 AM No comments:

Labels: Quotation of the Day

Last Republican on Death Bed and Other Predictions

I’ve been amusing myself by scanning issues of The Portholer, the shipboard publication of the U.S.A.H.S. Marigold during World War II. The Marigold, a hospital ship, is mainly remembered as the first Allied ship to arrive in Japan; according to my father, who served on it, crew members were ashore playing baseball as the surrender was signed.


Dead Pan, Nevada: Mr. Lemuel K. Olegard, 103 yrs old, known as “the vanishing American” today lay on his death bed. For a full century he voted the straight Republican ticket. In his delirium he muttered a name like “Wilkie”, no one can place it.

Other stories note the discovery of vitamin Z, the unionization of the presidency (President Ickes has joined the P.O.T. [Presidents of Things] branch of the C.I.O), and the accidental destruction of the earth by the “newest cosmic bomb”. (I’m not sure how that last story, datelined Metropolis, Mars, squares with stories from Washington D.C. and Off the China Coast, but then, you know what they say about consistency and hobgoblins.)

Anyway, this is what the future looked like to somebody or other circa 26 August 1945. Enjoy. 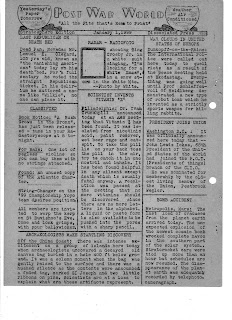