Obscure Biblical Figure Appears in the Archaeological Record--Or Not 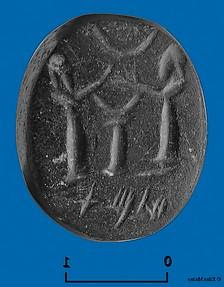 The Jerusalem Post has an interesting story about a seal from the first temple period:

A stone seal bearing the name of one of the families who acted as servants in the First Temple and then returned to Jerusalem after being exiled to Babylonia has been uncovered in an archeological excavation in Jerusalem's City of David, a prominent Israeli archeologist said Wednesday.

The 2,500-year-old black stone seal, which has the name "Temech" engraved on it, was found earlier this week amid stratified debris in the excavation under way just outside the Old City walls near the Dung Gate, said archeologist Dr. Eilat Mazar, who is leading the dig.

According to the Book of Nehemiah, the Temech family were servants of the First Temple and were sent into exile to Babylon following its destruction by the Babylonians in 586 BCE.

The family was among those who later returned to Jerusalem, the Bible recounts.

For those whose Ancient Near Eastern history may be a bit rusty, let me say that the First Temple, according to the Bible (or rather according to the Deuteronomistic History contained among the biblical texts), was built around 1000 BCE under the legendary King Solomon and destroyed 586 BCE by the historical Chaldeans or Neo-Babylonians or whatever you want to call them. A new temple (the Second Temple) was later rebuilt under the Persians. The destruction of the temple at least rests on a solid historical footing (we have ancient records of the event); since it was destroyed somebody presumably had it built, and Solomon is the name that tradition supplies. Of course tradition tells us that Ronald Reagan ended the Cold War too, and the one tradition may well be no better than the other.

Stone seals were the rubber stamps of the ancient world; officials used them to impress their signature, so to speak, in clay, so authenticating something as emanating from their particular office. Like rubber stamps, they were engraved in reverse, so that the impression would read correctly. The Jerusalem Post article notes:

The seal of one of the members of the Temech family was discovered just dozens of meters away from the Opel area, where the servants of the Temple, or "Nethinim," lived in the time of Nehemiah, Mazar said.

"The seal of the Temech family gives us a direct connection between archeology and the biblical sources and serves as actual evidence of a family mentioned in the Bible," she said. "One cannot help being astonished by the credibility of the biblical source as seen by the archaeological find."

There is a small problem, however, with this identification. It only works if the text is read the wrong way around. The Baptist Press notes:

But as it turns out, Mazar was misreading the inscription. Because the seal is designed to make an impression, the letters are written in mirror-image form, similar to how the word "ambulance" is written on the front of such a vehicle.

Following critiques from scholars such as the ones associated with the Biblical Archeology Society, Mazar now acknowledges the letters should read Sh-l-m-t. (Hebrew had no vowels.) If that's the case, then scholars believe it could refer to Shelomith, a man mentioned in Ezra 8:10 who also returned from Babylon to Jerusalem, or to Shelomith, the daughter of Zerubbabel mentioned in 1 Chronicles 3:19.

So, apparently, whether read forward or backward this stone seal turns out to corroborate the Bible. Again as the Baptist Press observes (without irony as far as I can tell):

The archeological discovery is at least the second one in recent months to make a tie to an obscure Old Testament name and thus, conservative scholars say, affirm the Bible's reliability.

Last summer British Museum officials announced the discovery of a two-inch-wide cuneiform tablet that contains details of a financial transaction by a "Nabu-sharrussu-ukin," who is called in the tablet the "chief eunuch" of Babylon King Nebuchadnezzar. That's the same person mentioned in Jeremiah 39:3 -- although spelled differently in different translations -- as the chief officer of Nebuchadnezzar who was in Jerusalem when the Babylonians overtook the city around 587 B.C.

We need to go back to the seal.... is it concave or convex? Is it a seal as already impressed, or a tool to do the impressing? We need better pictures, because as I look at your reverse example, I would say that it was concave... which would put us back at the former conclusion.